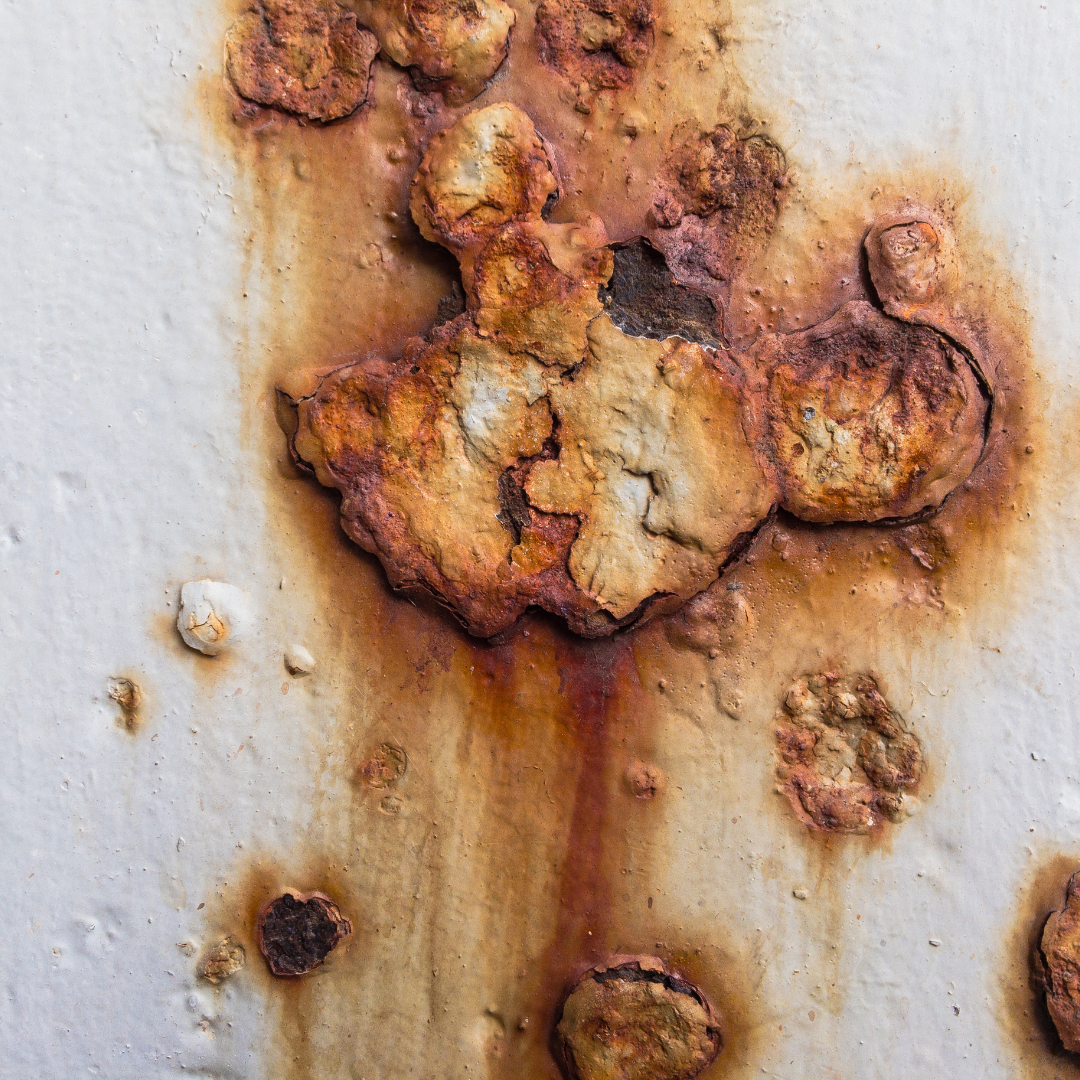 “It is common for high-performance structural components and process equipment to experience some form of corrosion regardless of what type of material is used and corrosion-resistant coatings can increase the lifespan of a part, as well as reduce maintenance and replacement costs. In order to select the appropriate coating, though, it is important to identify the kind of corrosion to which a part is prone. Based on how a part is used and what conditions it is exposed to, the kind of corrosion that develops may differ.

What Are the Types of Corrosion on Metal?

“Many metals exposed to dry air will develop a layer of corrosion on their surfaces which can protect the underlying metal as long as the air remains dry. Aluminum, for example, quickly forms a skin of aluminum oxide on its surface which clings tightly to the parent metal and prohibits further corrosion – even if atmospheric conditions change. Iron and steel, on the other hand, will form a layer of rust in dry conditions but as humidity, and temperature, increase, this rust will continue to form in the underlying material. But an iron bar in dry air can form a layer of protective iron oxide as long as the air stays dry.

“The phenomenon of electrochemical corrosion is well known. Two dissimilar metals, such as copper and zinc, immersed in water will quickly establish an electrochemical reaction where one metal – in this case, zinc – will become an anode and give up electrons to the other material – copper. The copper, in this case, acts as and is called a cathode. Chemically speaking, the zinc undergoes an oxidation process, its metal atoms losing one or more electrons and becoming metal ions. Meanwhile, as the two metals are electrically connected through the water bath, the copper undergoes a reaction process and gains the zinc ions. This is the principle behind the galvanic cell.

“For any two metals in contact, the one that is higher in the table will become an anode and corrode. Thus, the use of sacrificial zinc anodes to protect the hulls of ships.

“Although chemicals can corrode metals directly, most of the corrosion affecting metals that hold or are submerged in water, or that are subjected to moisture-forming films due to atmospheric exposure, is electrochemical in nature.

“Galvanic corrosion is extraordinarily common and occurs when two metals with different electrochemical charges are linked via a conductive path. Corrosion occurs when metal ions move from the anodic metal to the cathodic metal. In this case, a corrosion-resistant coating would be applied to prevent either the transfer of ions or the condition that causes it. Galvanic corrosion can also occur when one impure metal is present. If a metal contains a combination of alloys that possess different charges, one of the metals can become corroded. This is known as intergranular corrosion. The anodic metal is the weaker, less resistant one, and loses ions to the stronger, positively charged cathodic metal. Without exposure to an electrical current, the metal corrodes uniformly; this is then known as general corrosion.

“Stress-corrosion cracking (SCC) can seriously damage a component beyond the point of repair. When subjected to extreme tensile stress, a metal component can experience SCC along the grain boundary – cracks form, which are then targets for further corrosion. There are multiple causes of SCC, including stress caused by cold work, welding, and thermal treatment. These factors, combined with exposure to an environment that often increases and intensifies stress-cracking, can mean a part goes from suffering minor stress-corrosion to experiencing failure or irreparable damage. In brass, the failure due to stress corrosion cracking is dubbed ‘season cracking’; in steel, it is known as ‘caustic embrittlement.’ Hydrogen embrittlement of steel is also considered to be a corrosion phenomenon.

“General corrosion occurs as a result of rust. When metal, specifically steel, is exposed to water, the surface is oxidized and a thin layer of rust appears. Like galvanic corrosion, general corrosion is also electrochemical. In order to prevent oxidation, a preventative coating must interfere with the reaction.

“Localized corrosion occurs when a small part of a component experiences corrosion or comes in contact with specific corrosion-causing stresses. Because the small ‘local’ area corrodes at a much faster rate than the rest of the component, and the corrosion works alongside other processes such as stress and fatigue, the end result is much worse than the result of stress or fatigue alone.

“Caustic agent corrosion occurs when impure gas, liquids, or solids wear a material down. Although most impure gases do not damage the metal in dry form, when exposed to moisture they dissolve to form harmful corrosive droplets. Hydrogen sulfide is an example of one such caustic agent.

“Corrosion-resistant coatings for metal vary depending on the kind metal involved and the kind of corrosion prevention needed. To prevent galvanic corrosion in iron and steel alloys, coatings made from zinc and aluminum are helpful. Large components, such as bridges and energy windmills, are often treated with zinc and aluminum corrosion-resistant coatings because they provide reliable long-term corrosion prevention. Steel and iron fasteners, threaded fasteners, and bolts are often coated with a thin layer of cadmium, which helps block hydrogen absorption which can lead to stress cracking.

“In addition to cadmium, zinc, and aluminum coatings, often nickel-chromium and cobalt-chromium are used as corrosive coatings because of their low level of porosity. They are extremely moisture resistant and therefore help inhibit the development of rust and the eventual deterioration of the metal. Oxide ceramics and ceramic metal mixes are examples of coatings that are strongly wear-resistant, in addition to being corrosion resistant.

“Zinc coating (galvanizing) of steel is a sacrificial anode application. The zinc corrodes and protects the steel over which it is deposited. The thickness of the coating determines the life expectancy of the steel part. Likewise, sacrificial anodes may be placed on structures to protect the metal. The anode “burns” instead of the steel. For structures such as pipelines that are too large to protect with sacrificial anodes, a so-called impressed current is used for corrosion protection. Here, the negative side of a DC power source is connected to the structure and the positive terminal is connected to electrodes that are imbedded near the structure.

“Anodizing is another coating method used to prevent corrosion, particularly of aluminum. The process deposits aluminum oxide on the surface in a thicker layer than that which occurs naturally.

“The atmospheric corrosion resistance of steel may be improved by adding approximately 0.20% copper. However, high-strength, low-alloy (HLSA) steels offer even greater resistance.

“Coatings containing chromates and phosphates are effective corrosion inhibitors. Numerous polymer-based coatings are used to protect against corrosion, as well.”